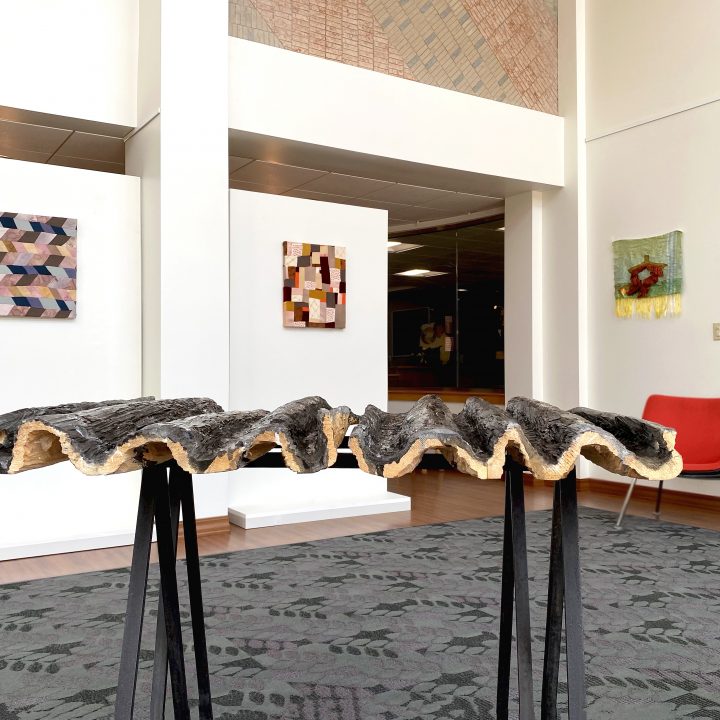 “String Revolution: Textile and Visual Artifact” combines several parallel but distinct imaginative paths involving the history, construction, and use of textiles. Artists Duncan Hewitt, Hannah Adams, and Isabelle O’Donnell use textile as an expressive form or subject, allowing reflection on the ways in which the history of the textile industry informs material culture and continues to inform daily life.

“So powerful, in fact, is simple string in taming the world to human will and ingenuity that I suspect it to be the unseen weapon that allowed the human race to conquer the earth.”

By at least 40,000 years ago, early humans had twisted together fibers to create string, crafting a labor-saving tool that greatly enhanced one’s odds of survival. Replacing sinew or hide strips, string served many roles. Fishing lines, snares, nets, baskets, and handles could catch, hold, and carry. Twisted-fiber thread bound disparate objects together, stimulating increased tool complexity. Between 20,000 and 26,000 BCE, needles appeared, and gravesites included beads crafted from bone, teeth, or shells, an indication of personal adornment. A re-examination of “Venus” figurines reveals hula-skirt like coverings, waist strings, and hair nets or snoods. Thread permits a sewing more delicate than sinews can allow. Weave many threads together, and you have cloth. Of other creations, we can only imagine. Fibers rarely survive in the archaeological record.

Now known as the String Revolution, the development of fiber work demarks a momentous technological innovation. Fiber work was likely the work of women. Tied to home site with child and elder care, fiber work was ideal. The task is interruptible, allowing one to pause without consequence. The products are portable and easily moved as seasonal migration demands. The raw materials are familiar and accessible, and the variety of flora encouraged creativity, experimentation, and hence, refinement. The task itself requires no physical strength. Indeed, the injured, the elderly, and the nursing mother could all participate.

For most of human history, fiber-based crafts largely fell to women. Quotidian and exceptional, invisible and evocative, the labor of anonymous hands transformed our world.